Super Tuscans are a relative newcomer on the historic Italian wine scene, but these high-quality wines have captured the hearts and minds of global wine lovers and investment-minded buyers over the past few decades. Italy’s rise in recent years has made its wines an essential component of a fine wine portfolio and Super Tuscans have formed a key driver of growth. Therefore, any new releases should be looked at closely as an opportunity to access some of the finest wines in the world that can deliver healthy long-term returns.

The term Super Tuscan refers to wines from Tuscany that typically include international grape varieties such as Cabernet Sauvignon, Cabernet Franc, and Merlot. The Super Tuscan ‘movement’ began in the mid-20th century when some producers sought to branch out beyond the Chianti Classico regulations that required a significant portion of the Tuscan native variety Sangiovese in all DOC (Denominazione di Origine Controllata) wines. One of the first, Marchese Mario Incisa della Rocchetta (a cousin of the Antinori family) recognised the similarity of the gravely terroir of the Maremma region on the Tuscan coast to Graves and some other top Bordeaux terroirs and sought to produce high quality wine using Bordeaux varieties. This brought about the birth of Sassicaia, which released its first commercial vintage in 1968.

The first vintage of Piero Antinori’s Tignanello followed in 1971. Although this used a majority of Sangiovese and hailed from the Chianti region, it still came under the broad Tuscan umbrella as some international red grapes were used. Tignanello was also the first Sangiovese to be aged in French-style barriques. The Tignanello estate then started producing Solaia in the late 1970s, a wine based on Cabernet Sauvignon and Cabernet Franc.

Not to be outdone, Piero’s younger brother Marchese Lodovico Antinori started making Cabernet Sauvignon-led Ornellaia from vineyards next door to Sassicaia in the mid-1980s. He shortly followed with another success in the form of 100% Merlot Masseto.

It wasn’t long before the term ‘Super Tuscan’ took hold to describe this core group of fantastic wines. In 1992, the Tuscan IGT (Indicazione Geografica Tipica) was created (these wines previously were ‘Vino da Tavola’) with loose regulations to incorporate the diversity of this new crop of Tuscan standouts. In 2004, the Bolgheri DOCs - Bolgheri Rosso DOC and Bolgheri Superiore DOC – were created in recognition of the outstanding quality. Sassicaia received its own subzone - Bolgheri Sassicaia DOC.

The outlook for the Super Tuscan market remains rosy. Italy overall has posted impressive price returns in recent years, led by Piedmont wines and Super Tuscans. But even following the recent price growth, Super Tuscans are still attractively valued compared to their counterparts in Bordeaux (below chart).

While the 2018 vintage in Tuscany may not be receiving the same level of acclaim as the glorious 2015 and 2016 wines, the vintage is still a success overall with the leading Super Tuscan names producing well-reviewed wines. Jancis Robinson reported: “Tuscan producers were pleased with the 2018 vintage. While warm, the heat wasn’t as excessive as elsewhere in Europe, and the watchwords seem to be silkiness, elegance and some surprising freshness.”

Here, we look individually at some of the recent Super Tuscan releases with our analytical research-based approach.

The newly released 2018 Solaia offers a ‘silky’ and ‘elegant’ vintage for wine lovers and a well-priced wine positioned for onward price growth for investment-minded buyers. Although some may focus on how the 2018 fell short of the back-to-back perfect scores (Wine Advocate) Solaia attained in 2015 and 2016, this overlooks the fact that the new wine’s 97+ points is the third-highest ranked Solaia by the Wine Advocate.

The £972 (6x75cl) UK RRP also appears reasonable as it comes below the current prices for the 100-point wines and broadly in line with most other back vintages, including those with lower scores. Solaia is a long-lived wine and excellent vintages such as the new 2018 should not be overlooked for long-term growth potential. 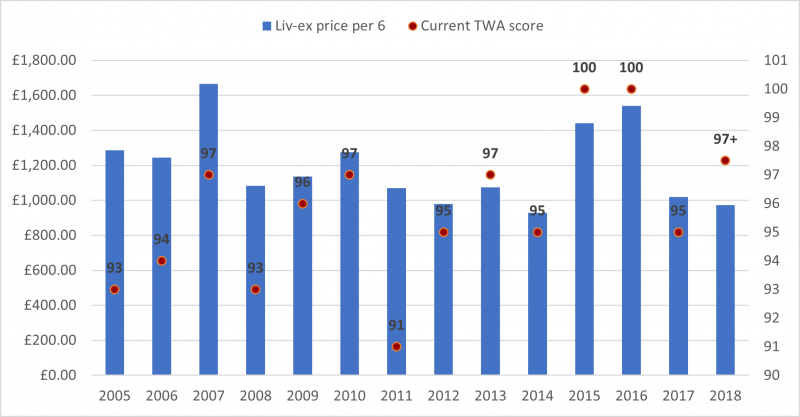 Masseto is regarded by many as Italy’s finest single-varietal Merlot as it ranks up there with the most prestigious names from Pomerol on the world stage. This type of following plus Masseto’s low production levels creates an excellent investment wine.

Like Solaia, one could initially overlook the 2018 due to the recent perfect scores in 2015 and 2016. However, its 97 points still puts it in the upper echelon of Masseto wines and the exclusivity of the name means that most back vintages show a consistent track record of price appreciation over time, especially if held for 5-10 years.

Its RRP release price of £2,950 (6x75cl) leaves room for long-term growth according to our analysis. Masseto’s reputation has soared in the last decade and should continue to do so, helped by Tenuta dell'Ornellaia recently opening a winery dedicated solely to Masseto production. 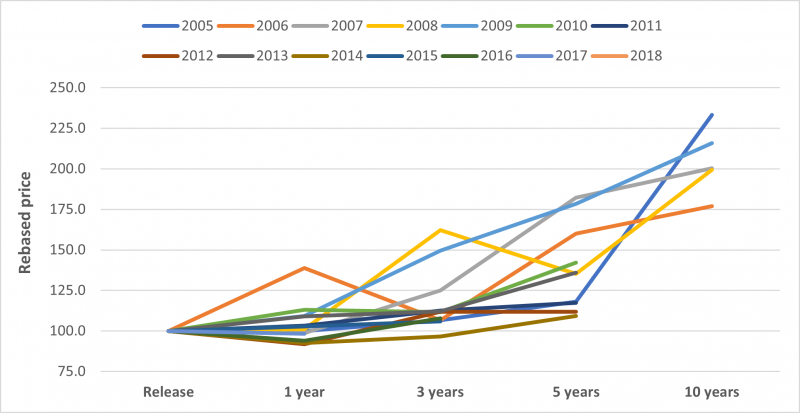 We are also closely watching Masseto’s ‘second wine’ - Massetino - as it holds exciting potential in our view. The newly released 2019 is just the third vintage of Massetino and its 94-96-point Wine Advocate score could wind up as its highest rating so far if it settles at the top of the range.

In Bordeaux, many second wines of the top producers have delivered substantial price appreciation over the past decade.  Massetino’s incredible quality and unique identity (using a portion of Cabernet Franc in the blend) set it up well as a potential rising star.