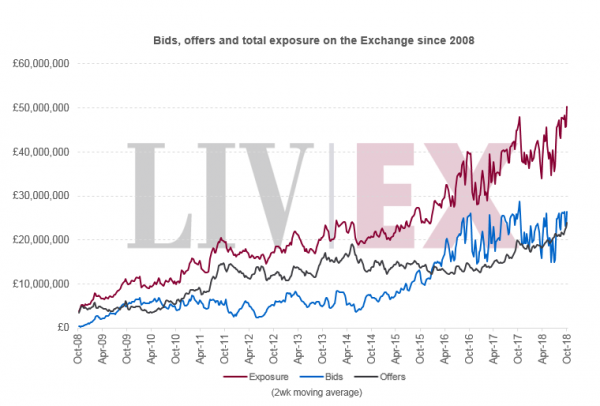 The total value of bids and offers on Liv-ex, known as exposure, has reached record levels this month. It’s risen steeply over the last 10 years and doubled within the last three. As the chart indicates, it now stands at just over £50 million – roughly a £6 million increase since Liv-ex’s last exposure update in October last year.

According to Liv-ex, both bids and offers have been on the rise recently. “The bid:offer ratio (the total value of bids divided by the total value of offers) has remained just above 1 and currently stands at 1.09,” the platform explains in a blog post. “A bid:offer ratio of 0.5 or higher has historically indicated an uptrend in the market, or at least acts as a signal for price stability.”

Liv-ex also notes that another factor at work is the evolving secondary market for fine wines. “The market has been growing and broadening, with a record number of different wines trading,” it says, which will have contributed to this increasing rise in exposure.