During the week of February 4th, Cult Wines was a co-sponsor to the British and International Mono-bob Championship in St Moritz, Switzerland, managed and promoted by the St Moritz Horseshoe Club (SMHC).

Part of our sponsorship during the week was a dinner and tasting from Ludovic Fradin, the Commercial Director of Smith Haut Lafitte we hosted at the Stefani Hotel on the Tuesday evening, some tasting notes and observations are below.

A few words about the wines:

Anyone following our video channel ‘One More Glass’ will attentively note that I compared this wine to a long term relationship (as opposed to their younger offering, which is a bit of a fling!). Smith Haut Lafitte’s white is arguably their very best offering and this is no exception- incredibly complex and rich, it sports tropical fruits from pineapple through to orange, with deeper notes of fig, vanilla and hazelnut. It takes a bit of work, but is well worth the effort!

Conversely, this is the fun little sports car, stand-up comedy or reality TV show of wine- easy to enjoy, great fun and quite addictive. Bottle after bottle could be sunk on a summer’s eve, with lighter more floral aromas, coupled with the refreshing citrus, melon and guava flavours- chased by just a touch of nuttiness.

For me, this was a real childhood aroma- fortunately I don’t mean cigar box, but instead that lovely smell of a freshly shaved pencil. Graphite and cedar intermingle with the attractive blackberry fruit, which is just starting to evolve into something a bit Mediterranean- rosemary and black olive perhaps?

Un mal pour un bien. A vintage universally regarded at its best as ‘classic’ (Bordelais for ‘alright’) and at worst as a wash out, has produced a Smith Haut Lafitte which punches several classes above its weight. The wine belies the troubled conditions with delightfully ripe, velvety blackberry and blueberry evolving into liquorice and crème de cassis. The signature graphite scent of Graves predominates.

A Ringer! We had been expecting the 2000, but were all pleasantly surprised by its replacement- Parker even goes as far as to compare the quality of the two. Typical Graves elegance with seamlessly balanced fruit, pencil lead, cigar smoke and an unexpected voluptuousness.

A wine on the other end of the spectrum, the Beauregard offered dry, extracted and evolved fruit. Genteel and graceful, it had also become joyfully plump with age- glycerol, sweet and fleshy, but with a countenancing freshness.

We’re spoilt by Sauternes. These heavenly sweet wines cost little and deliver a lot- this was no exception. Typical notes of honey, pineapple and apricot mingle with a waxy, herbaceous edge. The Bastor 11 gave us everything we wanted, but no more; failing to stand head and shoulders above this albeit delicious crowd. 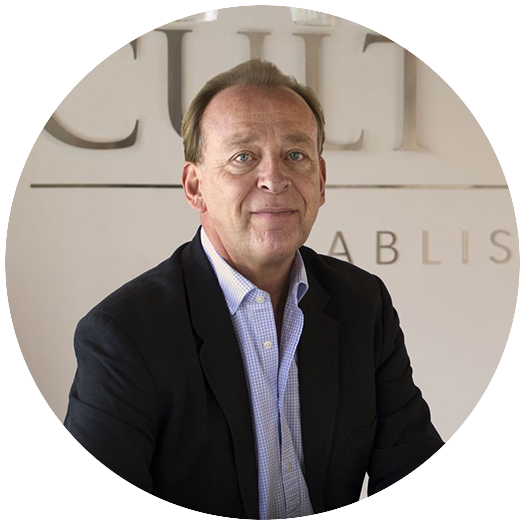 Patrick Thornton-Smith joined Cult Wines in May 2017 having spent the previous 30 years in the financial markets specialising in listed and OTC derivatives. Patrick worked for Barclays Capital, ICAP and a range of fintech firms from start-ups, including his own for five years, to established vendors and spent a number of years living in the both Chicago and New York. His range of roles was wide and covered strategy, marketing, sales, operations and senior management positions. Prior to joining Cult Wines Patrick was Managing Director at Duco, a fintech vendor.

A family friend to the Gearings for over 20 years, his role as Executive Director is to support the business in new areas of opportunity and is a member of the Global Management Team. Happy to have left the City, Patrick maintains close relationships with the Square Mile and beyond and is a Trustee of Futures For Kids Charity. A self-professed ‘consumer not expert’ in fine wine his tastes are broad but err towards white burgundy, with Domaine Leflavie a particular favourite and Pinot Noir, both old and new world varieties. He holds the WSET Level 2 award.

Outside fine wine Patrick, inevitably, has a great love of food and unlike most of the Cult Wines staff, he does not support any football team but is an avid fan of the oval ball game and is a Harlequins fan.