Fine wine, as measured by the Liv-ex 1000, climbed by 0.76% in May, continuing its steady upward trend over the past year. Although Bordeaux en primeur was the focus, the Rest of World and Champagne regions posted the strongest gains. The wine market found continued support from an improving macro backdrop as COVID-19 vaccines paved the way for economic reopenings.

Positive economic news also boosted most global equity markets. However, the recovery had the adverse effect of triggering higher-than-expected inflation data. Headline inflation in the US rose 4.2% year-on-year (YoY) in May. This roiled markets early in the month due to concerns central banks would tighten monetary policies, which could temper the economic recovery. However, the view that concerns were overdone took hold later in the month and markets stabilised. Tech stocks largely underperformed on the month.

Emerging market equites also performed well, recovering from weakness in Q1 when Chinese markets experienced a correction over similar concerns about monetary policy as developed markets are now going through.

Bond markets saw a choppy month with yields jumping mid-May on the back of the inflation print. However, yields moved lower as volatility stabilised. The US 10-year yield ended the month around 1.60%, a few basis points lower than where it began. UK Gilts followed a similar path as did eurozone yields where expectations of monetary policy tightening are lower.

The more positive tone at the end of the month saw the safe-haven US dollar continue a two-month easing against most other currencies. The pound sterling maintained its strength against the US dollar and the euro in May, as the UK continued to move ahead with its economic reopening schedule. The Chinese yuan hit three-year highs against the greenback in late May on the back of the more-advanced economic recovery.

The wine world’s attention centred on the Bordeaux 2020 EP campaign, which kicked off mid-month with a handful of new releases from a vintage that is widely deemed as high-quality but with pockets of inconsistency.

Early releases included Right Bank First Growths Cheval Blanc and Angelus as well as several wines from our Quality Price Ratio (QPR) category. So far, release prices have varied with some producers pushing prices higher more aggressively than others, meaning wines need to be looked at on a case-by-case basis to determine the best value. In terms of secondary market performance, the Bordeaux 500 rose by 0.41% on the month.

The best regional performance came from Liv-ex’s Rest of World 60 index, which climbed by 3.06% in May. Screaming Eagle Cabernet Sauvignon 2015 posted strong gains during the month, possibly helped by the US economy reopening.

The Champagne 50 index posted the next highest regional performance at 2.12% while its trade share by value hit one-year high, according to Liv-ex. Within the index, Louis-Roederer Cristal 2008 appreciated the most during the month. Rose Champagnes have also enjoyed a run of outperformance recently.

The Burgundy 150 edged higher in May by 0.40%, a slower pace than its gains early in the year in the wake of its successful 2019 EP campaign. Burgundy remains the top performing region year-to-date at 6.62%.

Italy 100 was the only regional index to end lower with a small 0.10% decline. Italy has experienced an up-and-down 2021 so far. On the heels of a strong 2020, Italian prices consolidated early in 2021 and then regained their strong upward trajectory in March and April before easing again in May, leaving it 1.96% higher year-to-date. 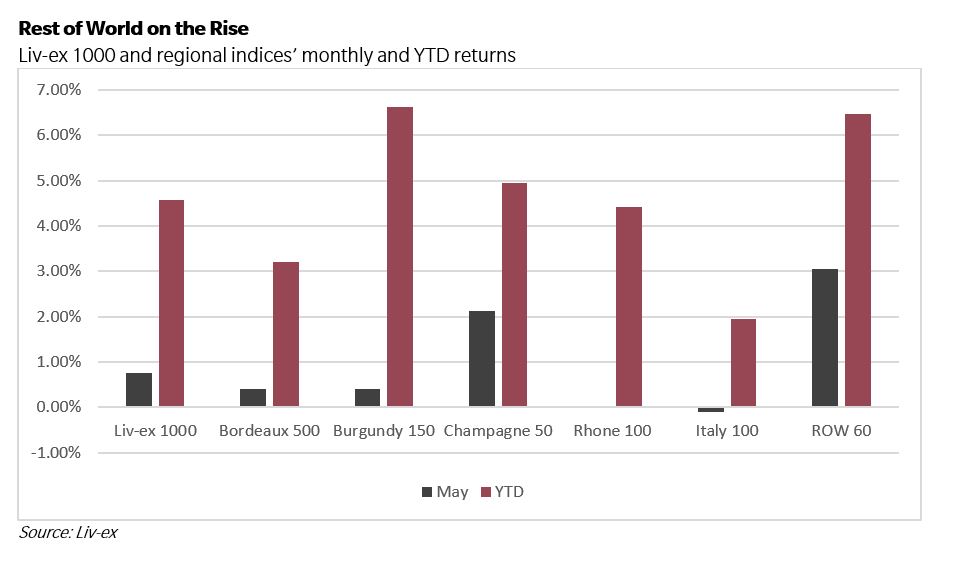